THE TIME IS NOW – ALBUM PRODUCTION STORY AND MORE!

While working on this album “The Time is Now” over the last 12 months, I have learned so much about songwriting, performing and music production. Most of this is due to the vast years of experience that Charlie Karp has shared, and the top quality sound engineering and drumming by Mark Rudzinski.


Charlie’s story is an amazing one, you should read up on him on his web-site www.charliekarp.com. He was discovered by Buddy Miles (Band of Gypsies with Jimi Hendrix) and toured with Buddy Miles opening for Jimi Hendrix and on other world tours.


This is one of the best videos online available now of Charlie but there are many . It is whe PLAYBOY>> The Buddy Miles played on the Playboy After Dark show in the 70’s. Charlie is the tall kid on the far left in the sweater playing lead guitar. I love Hugh Hefner’s line “Oh Byron, he’s also playing in the den”... LOL

One of the best concerts he said was opening for Three Dog Night (80,000 fans at one show at the Cotton Bowl) and hundreds of concerts worldwide. they recorded 4 albums and toured for 5 years. Buddy Miles also had an amazing career. Charlie later went on to write and produce albums with Danny Kortchmar (James Taylor, Carly Simon, Don Henley) and others.


Charlie grew up in Westport CT as a teenager in the vibrant late 60’s when rock and blues was smashing the main stream radio and concert scene. Bands like “The Yardbirds”, “The Animals”, “The Doors” and other huge international acts we being booked ironically at Westport CT Staples High School. Charlie Karp’s band would open or perform for these acts repeatedly. That is how he met Buddy Miles, Buddy needed a band to support him in Westport and Charlie’s band was the hottest band around. When Buddy Miles heard Charlie Karp play, that was it!!! Charlie was the new kid in Buddy’s band playing lead guitar for “The Buddy Miles Band”.


In this video filmed in Finland you can advance to 2:09 for a close up of Charlie Karp playing in the Buddy Miles 1971  and again at the 3:00 mark.


Charlie has done a lot since working with Buddy Miles. Charlie is locally famous for the night his friend Keith Richards showed up at the Georgetown Saloon while Charlie and Danny Kortchmar were playing and Keith played on stage for several songs..People won’t forget that story for a long, long time around here.


I met Charlie Karp when I booked his band in 2012 for a fundraising event I held called “Music for Veterans” which raised money for our returning war veterans. Charlie’s band (among 4 other bands) had the place rockin’ and the event proved to be very successful. In a proof of “Putting something great out into the Universe” great karma proved to return…simply because Charlie and stayed in touch via email since that event.


In October 2014 I visited Charlie at his studio “CK Studios” and I played some of my material and he played some of his, we hit it off instantly Charlie has hundreds of original songs in his catalog. We jammed on “Down By the River” which he had recorded with Buddy Miles in the 1970’s (great version you should find it) and other free form stuff.


He knew I was planning on a solo album and after a couple of sessions Charlie said, “So let me hear what you’ve got”. I really did not have that much material formally written but I had all these song parts in my head and some on a digital 8 track. I had some lyrics and the song “It’s Her Eyes” was complete, but most of the others were not.

Finally by late November 2014 I said, “Midnight Radio, here it is, I think I have it almost done” and I played it for him and we had my digital 8 track recorder and Charlie said; “I LOVE THAT SONG” and I said; “I am glad you like it, that’s music to my ears!!”. .pun intended!


Usually I mess around with chord changes, and then later add lyrics. That is what happened with “Midnight Radio, Midnight Radio”. I had a progress from D major to C/G and I really liked the slow feel with just those chords meshing. In the past I used to think good songs had to have many chord changes to be good. I realized after some really intense listening that that is not the case in most instances. Some of the best and most appreciated songs are actually very, very simple. “Less is More” is something my dad used to say sometimes. It is a philosophy passed down from his family. His mother’s family the “Smiths” were settled in CT in the late 1600’s. Lord knows they had less than more back then!


So I started the song’s chords with D, and that sweep to C/G it is actually a Em#5/G chord as shown here in the second chord chart box. The visual concept I found in my head was of a long desert highway at night, at midnight. When someone driving for work, maybe a truck driver would be out along the highway in solitude. I visioned a long highway with little traffic at night in the desert.  Not necessarily  lonely but peaceful. I pictured the driver thinking very hard about his girl back home. “Midnight Radio, Midnight Radio, are you playing our song, are you playing our sooooonnnnng?” Is she still being faithful and keeping him in her heart while he is so far away? The driver uses the radio, which keeps him company while driving on such a lonely stretch of highway, but he can’t help but wonder if she is faithful. The radio “fades in and out”.. like their relationship. I think we can all relate to that sometimes.


I worked hard on the lyrics and our daughter Nicole helped with the chorus, she suggested having the chorus sing over the chord changes of F, Am, C, G, D… I realized that was an excellent suggestion on her part. The song actually has two choruses which is unusual, So it started out simple, but the first chorus starts out on the D to the C/G, then the full chorus on the F, Am, C, G and D. People seem to love that song. So far, it is the most appreciated of the 5 songs.


I commissioned a friend Anna Roberts to do a painting on the song. I said “please listen to it and paint what you hear.. She did, and Anna did a great, great job. Here it is, can you find the references to the lyrics?


Here is Anna’s work below: You can find more of her work on Facebook
https://www.facebook.com/AnnaRobertsArt 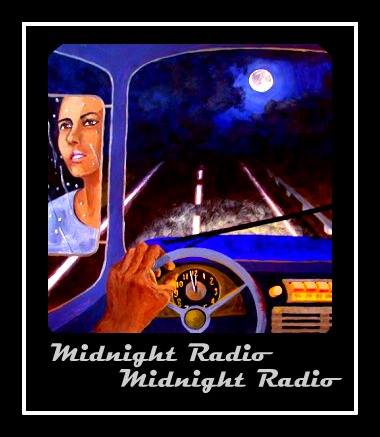 The album is available on iTunes and directly for a discount at www.scottbounty.com 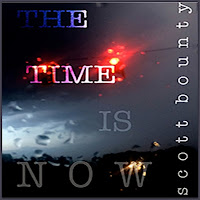